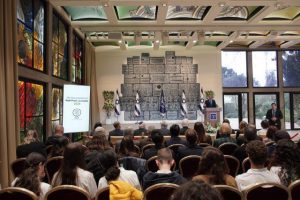 The names of the 2020 Wolf Prize for Science and Art laureates were announced this morning at the presidential residence in the presence of Israel President, Mr. Reuven (Ruvi) Rivlin, Minister of Education, Rabi Rafi Peretz and Prof. Dan Shechtman, Council Acting Chairperson.

This year will mark the 42nd year in which the Wolf Prize is awarded by the Wolf Foundation. The 2020 prizes will be awarded to nine laureates from six countries (USA, England, France, Russia, Spain and Israel)

2020 Wolf Prize in Art will be awarded to Cindy Sherman (USA) for redefine the concept of art made with a camera.

The Awarding Ceremony will take place on June 11th in Jerusalem. The Wolf Awards will be presented by the President of the State of Israel, H.E. Reuven (Ruvi) Rivlin and by the Chairman of the Wolf Foundation.