About the Wolf Foundation 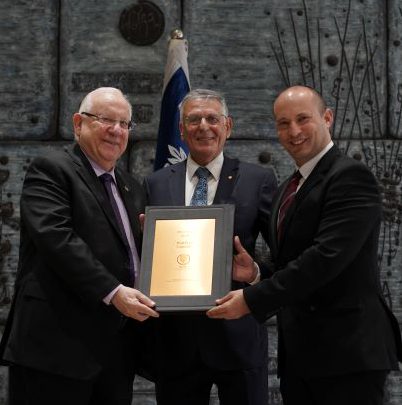 The Wolf Foundation is a highly prestigious Foundation, that both celebrates and promotes exceptional achievements in the Sciences and the Arts worldwide.

The Wolf Foundation began its activities in 1976, with an initial endowment fund donated by the Wolf family. The Foundation’s founders and major donors were Dr. Ricardo Subirana y Lobo Wolf and his wife Francisca.

The Foundation has a status of a private non-profit organization. Its objectives and prize administration details and procedures are grounded in the “Wolf Foundation Law-1975”. Israel’s State Comptroller oversees all Foundation’s activities. In accordance with the above-mentioned Law, the Minister of Education acts as the Chairman of the Council.

Foundation Trustees, Council and Committee Members, Prize Juries, and Internal Auditor, all perform their duties on a voluntary basis.

Every year, the Foundation awards the acclaimed, international Wolf Prize.

The prizes are awarded to outstanding scientists and artists from around the world, (regardless of race, nationality, colour, religion, gender or political views) for achievements in the interest of humanity and friendly relations among peoples.

The Wolf Foundation initiates educational activities to strengthen scientific and artistic excellence, exposing educators and the public to the forefront of sciences as well as arts.

Dr. Ricardo Wolf (born in in 1887, Hanover, Germany) was one of 14 children born to Moritz Wolf, a pillar of that city’s Jewish community. Wolf senior instilled in his children great respect for education and high moral and ethical values - a legacy, internalized and applied by Ricardo Wolf throughout his long life.

Prior to World War I, Dr. Wolf emigrated from Germany to Cuba, which became his second home. In 1924, he married Francisca Subirana, a world tennis champion of the 1920’s.

For many years, Ricardo Wolf worked to develop a process for recovering iron from smelting process residue. Ultimately successful, his invention was utilized in steel factories all over the world, bringing him considerable wealth.

The humanistic values instilled during his youth, led Dr. Wolf to lend both moral and financial support to Fidel Castro, from the onset of the Cuban revolution. Beholden to Ricardo Wolf for his unswerving support, and cognizant of his personality and natural gifts as a diplomat, the Cuban leader responded to Dr. Wolf’s request and appointed him in 1961 Cuban Ambassador to Israel. Dr. Wolf held this position until 1973, the year Cuba severed diplomatic ties with Israel.

Upon relinquishing his diplomatic post, Dr. Wolf decided to remain in Israel, where he spent his final years.

For Dr. Wolf, the Wolf Foundation which he established, in 1975, was the embodiment of his philanthropic activities, to be continued beyond his own lifetime, for the benefit of mankind.
Dr. Ricardo Wolf passed away at his home in Herzlia in February 1981. His wife Francisca died less than a month later.

President of the State of Israel

Minister of Higher Education, Chairperson of the Wolf Council

Board of Trustees (BOT) Chairperson